A conservative judge just made it even harder to stop covid

Leah Litman is an assistant professor of law at the University of Michigan Law School and host of the podcast "Strict Scrutiny," about the Supreme Court.

A federal judge this week struck down as unconstitutional statewide shutdown policies ordered by Pennsylvania Gov. Tom Wolf (D) to curb the coronavirus. On its own, that is significant — a judge second-guessing a governor during a public-health emergency — but equally notable is how the court arrived at its conclusion. U.S. District Judge William S. Stickman IV put forth an array of objections to the orders, including they violated residents’ First Amendment rights of association and were not tailored to take account of differences in viral spread in different parts of the state. He also argued the governor was not owed any special deference from the court because he was dealing with an emergency.

But what was most striking — what reveals the radical nature of the opinion — is that Stickman leaned on a discredited 1905 Supreme Court decision, Lochner v. New York, in arguing Pennsylvanians had the due process right to choose how to earn a living, even during a pandemic. Until this week’s case, Lochner had been consigned to the dustbin of history. Lochner specifically held that states could not impose maximum hour restrictions on bakers, because that would infringe the bakers’ freedom to work long hours if they chose. But more broadly, Lochner read a theory of “economic liberty” into the Constitution, thereby blocking all sorts of government regulation of working conditions and wages until the mid- to late 1930s, when judges effectively wrote off the decision and departed from its reasoning.

Today, of course, states and the federal government regulate working conditions and wages extensively — although libertarians occasionally express the desire to revive the Lochner perspective.That a district court judge would cite the decision shows how consequential President Trump’s stacking of the courts has been. The committed ideologues he has appointed — Stickman joined the district court in 2019 — stand in the way of effective public-health policy and will promote the Republican Party’s political agenda for decades to come. This case shows they will do so even if they have to turn back the constitutional clock.

The Pennsylvania case involved challenges to two measures — one that restricted the size of gatherings and one that closed “non-life-sustaining” businesses. The specific orders have expired, but the court reviewed their constitutionality because the orders could “be re-imposed” at any time. The court acknowledged the policies were “well-intended effort[s] to protect Pennsylvanians from the virus” but nonetheless held they violate numerous provisions of the Constitution.

That includes, in the judge’s view, the Due Process Clause. When Lochner was decided, “due process” protected workers’ rights to enter into any sort of agreement with employers, no matter how unfair (and regardless of what legislators wished). The judge seemed to be aware that this is no longer the case, writing “the emphasis given to economic substantive due process reached its apex in the Lochner era” before it was “considerably recalibrated and de-emphasized by the New Deal Supreme Court and later jurisprudence.” But still, the judge concluded, “The Supreme Court has never repudiated the recognition that a citizen has the right to work for a living and pursue his or her chosen occupation.”

Really? Not only are maximum-hours and minimum-wage laws now standard (if often flouted), the court has also upheld laws that strictly limit certain occupations and trades: States can prohibit opticians from fashioning new eyeglasses based on an old prescription, for instance, and (in a case that explicitly rejected Lochner) forbid non-lawyers to work as debt adjusters.

It’s true the court never explicitly overruled Lochner. But in a 1933 case, the court said states are “free to adopt whatever economic policy may reasonably be deemed to promote public welfare.” Whereas Lochnermeticulously scrutinized whether New York’s maximum hour laws was carefully tailored to the state’s goals and concluded New York did not have enough evidence to single out bakers, the court later held a state need only show a regulation is “reasonable” and “adopted in the interests of the community.” “The doctrine that prevailed in Lochner … has long since been discarded,” the Supreme Court wrote in 1963. That may not be an explicit overruling, but it’s close.

The modern court has made clear states are entitled to particular deference “in areas of social and economic policy” and need only show “there is any reasonably conceivable state of facts that could” justify its policy. Applied to the Pennsylvania situation, this due process analysis could not be more straightforward: Large gatherings and nonessential businesses risk becoming super spreader events, and so the state can reasonably restrict them.

That a judge would attempt to revive Lochner is genuinely shocking. In a 2011 article, law professor Jamal Greene identified Lochneras part of the “anticanon” — among the handful of the very worst decisions by the court, one of a set of cases that “all legitimate constitutional decisions must be prepared to refute.” Law professor Richard Primus has summarized its status in this way: “Lochner v. New York is never cited for its legal authority … [I]t is well understood among constitutional lawyers that relying on Lochner would be a pointless, if not a self-destructive, endeavor.”

Apparently Judge William Stickman IV thinks he knows something everyone else does not. His decision is an act of judicial insurgency that we can expect other Trump nominees to the federal bench, of which there are many, to repeat. Trump and the Republican-controlled Senate have confirmed more than 200 federal judges in just four years. By comparison, over eight years, President Barack Obama confirmed 329 judges. Trump has also confirmed almost twice as many jurists as Obama to the influential courts of appeals. The judges Trump has nominated are also young; The average age of a Trump nominee is mid- to late 40s, whereas the average age of an Obama nominee was mid-50s. Stickman is in his early 40s and could serve on the bench for another four decades.

In one famous case, the court said decisions over the course of the 20th century “signaled the demise of Lochner.” The observation came in Planned Parenthood v. Casey, when the Supreme Court declined to overrule Roe. 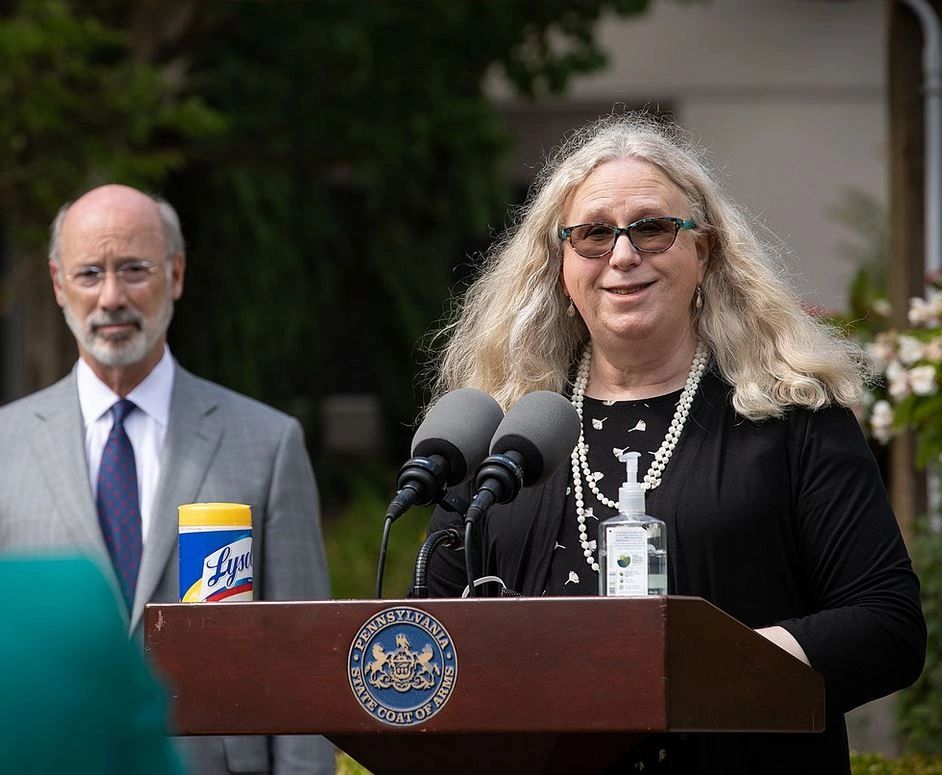 Rachel L. Levine  is currently serving as the Pennsylvania Secretary of health. She also serves as Professor of Pediatrics and Psychiatry at the Penn State College of medecine.  She was previously Pennsylvania's Physician General.United  States.

Individuals Who Have Been Furloughed, Laid Off, or Have Reduced Hours

Department of Community and Economic Development

The Wolf administration has created one of the most sensible, comprehensive and economically feasible plans in the United States. The Columbia County Democratic Committee wishes all citizens a safe and successful future as we dig our way out of this unprecedented time.

The world is changing quickly. We will keep you up to date

a message from our state officials

Update on Coronavirus Impact in PA

Information about the presence and spread of coronavirus here in the Commonwealth is quickly and constantly changing. To help you keep up-to-date on the information that matters most to you, I put together a page of online resources that includes links to the Pennsylvania Department of Health and Centers for Disease Control and Prevention, as well as news about school closures, PennDOT information and more.

Coronavirus 101 - What is it and how do I protect myself?
According to the Centers for Disease Control and Prevention (CDC), the 2019 novel coronavirus (COVID-19) is a new virus that causes respiratory illness in people and can spread from person-to-person. Symptoms of COVID-19 can include fever, cough and shortness of breath. The symptoms may appear in as few as two days or as long as 14 days after exposure. Reported illnesses have ranged from people with little to no symptoms to people being severely ill and dying.

The CDC and PA Department of Health (DOH) suggest some simple steps you can take to protect yourself and others:

" Cover coughs or sneezes with your elbow. Do not use your hands!
" Wash hands often with soap and water for at least 20 seconds. Use an alcohol-based hand sanitizer if soap and water are not available.
" Clean surfaces frequently, including countertops, light switches, cell phones, remotes, and other frequently touched items.
" If you are sick, stay home until you are feeling better.

Why did the governor close our schools and businesses?
Information from the World Health Organization, the CDC, DOH and others, clearly show that coronavirus has been taking a toll on countries around the globe and is now having wide impact across the United States. Cases have been reported throughout the state, with our first coronavirus-related death occurring this past week. More than 100 have died across the nation, and more than 8,000 worldwide according to data collected by Johns Hopkins University.

The vast majority of people afflicted with COVID-19 recover; however, it is especially dangerous for senior citizens and others with compromised immune systems. The closures outlined by the governor are designed to help prevent the spread of the virus to protect those vulnerable populations using the concept of "social distancing" - simply keeping people apart so as not to pass the virus from one person to another. Since a person may be a carrier of the virus for as long as two weeks without displaying any symptoms, simply telling people to stay home if they are not feeling well is not enough to prevent the spread of COVID-19.

Currently, grocery stores, pharmacies and gas stations are among the businesses that may remain open, as well as bars and restaurants offering take-out or delivery services (no dine-in service is permitted). Businesses that must be closed, based on the governor’s guidance, include things like hair and nail salons, gyms, theaters and sports venues. With regard to businesses, the governor has urged nonessential businesses (which he defines as things like hair and nail salons, gyms, theaters and sports venues) to close to help create social distancing, but as yet has not issued an emergency order. He has ordered bars and restaurants to discontinue dine-in services, but they may offer pick-up, take-out or drive through service. Even before businesses were urged to close temporarily, many had seen a significant drop in traffic, affecting both their bottom line and in many cases, that of their employees. For more information concerning unemployment compensation for EMPLOYEES, click here.  For more information concerning EMPLOYER unemployment relief, click here.

What's Next?
As suggested by the CDC, it is important we all stay calm, limit unnecessary travel and interactions with others, wash our hands, pay attention to how we are feeling and be patient. The House was in session earlier this week to vote on a rules change that will allow us to cast votes on legislation remotely if necessary. We will be looking at legislation to address unemployment needs, business assistance and more.

Most Everything You Need To Know!

We will try to stay current on updates to how Federal, State and local governments are dealing with the COVID-19 crisis

these sites are the best starting places:

Information for Businesses Affected by the State Closure Order:

Other Information by Departments:

FEDERAL AND OTHER RELATED RESOURCES

Department of State (information for travelers)

It is a wise move to contact (by phone,text, email etc.) any stores you intend to visit to discover if they are open, will take orders by phoned in credit card information and if they will deliver to your vehicle.